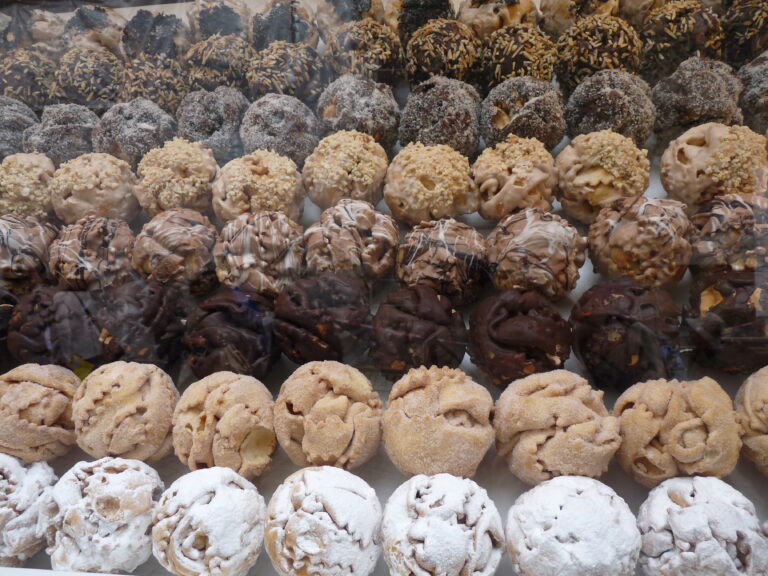 The pastry snowballs from Rothenburg, Germany

The quaint, walled, medieval town of Rothenburg ob der Tauber, located in Bavaria in southern Germany, is probably best known as a place where it’s Christmas all year round. There’s a Christmas museum and oodles of shops selling Christmas paraphernalia—plus, of course, an outdoor Christmas market in December (such as you’ll see all over Europe). I’ve been there a couple of times—including once on Christmas!—and let me tell you, Whoville has nothing on this town.

But Rothenburg has another claim to fame, too: a pastry called a Schneeballen, which is German for “snowball.” (Linguistic note: the word has two forms, either of which is correct: Schneeball, for which the plural is Schneebälle, and Schneeballen, which is spelled the same in both singular and plural forms. I’m going with the latter form here, because it’s what I remember seeing on bakery signs in Rothenburg.) The standard form of the pastry is slightly larger than a baseball and covered with confectioner’s sugar, so it does look more or less like a snowball. But the more popular varieties are covered with chocolate or other glazes, and often nuts or sprinkles; sometimes they’re filled with marzipan, nougat, or whatever. In other words, the variety of Schneeballen in a typical Rothenburg bakery somewhat resembles what you’d see in an American donut shop.

But I’m glossing over the important part of a Schneeballen: the pastry that makes up the actual structure. It’s a balled-up mass of shortcrust strips (flavored with plum schnapps)—carefully deep-fried, using a holder called a Schneeballeneisen to keep its shape and not fall apart in the oil. It’s dense, crumbly, and only vaguely sweet—but at least it’s greasy. (A Schneeballen will stay fresh, unrefrigerated, for two months, which I consider about 59 days longer than any decent baked good should remain edible.) After eating through the top surface, I found my first Schneeballen to be so disappointing that I quickly gave up on it, and indeed, my first became my last. They’re pretty to look at, and delicious on the outside, but—at least for the standard, unfilled varieties—difficult to get through. Come to think of it, that very fact may help to account for its fruitcake-like shelf life: perhaps it last so long because nobody really wants to eat it.

The above is, of course, just my personal opinion. If balls of fried dough are your thing, far be it from me to discourage you. You go right ahead and work your way through a Schneeballen, and I’ll just chow down on Lebkuchen.

from Interesting Thing of the Day https://tracking.feedpress.it/link/19120/8973823
via Security Installations Team

This is a text widget. The Text Widget allows you to add text or HTML to your sidebar. You can use a text widget to display text, links, images, HTML, or a combination of these. Edit them in the Widget section of the Customizer.